She served up love 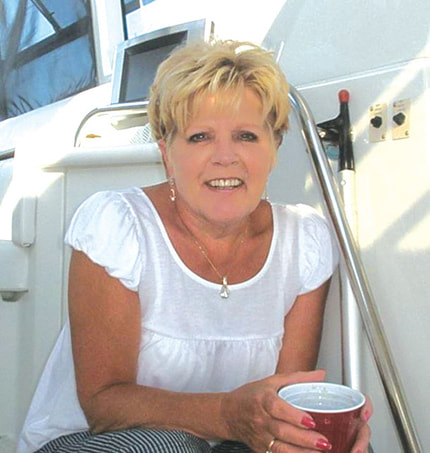 Sandie Parker will be greatly missed — by her family whom she cherished, by her friends whom she held dear, and by readers of the Elk Rapids News whom she regularly welcomed into her kitchen by way of recipes she shared through her weekly column, “Sandie’s Galley.”

Described as “a family-loving, fun and spunky woman” by her stepson Jeff Parker, Sandie died December 27 in Grand Rapids from congestive heart failure, just days shy of her 68th birthday.

She and her husband, Jim, were avid boaters and “sun chasers,” splitting time for years between homes in Elk Rapids and Punta Gorda, Florida, and aboard their 36-foot power boat, “Nice N’ Nauti,” out of Edward C. Grace Memorial Harbor. Most recently, they were living in Grand Rapids to be closer to family and medical resources.

Even as her health declined, Sandie continued to submit recipes eagerly anticipated by her loyal readers. Her joy in creating and sharing “easy, semi-gourmet” dishes began decades ago in the kitchen of Saginaw’s Germania Town and Country Club where she worked alongside a chef who taught her to “think outside the box.” It gave her the confidence to begin developing her own recipes, which quickly became favorites of friends and family.

When Sandie brought her sour cream burgers, pork chops dripping with jam-based glaze, Greek bean and veggie salad, and chocolate lover brownie squares to harbor potlucks, fellow boaters begged her to spill her secrets. How did she produce such epicurean delights out of her tiny galley? Would she be willing to pass along tips and recipes?

They were looking for a new recipe columnist and signed Sandie on; her first column appeared in the August 17, 2006 edition. Her recipes also eventually reached readers of the Saginaw Times, The Great Lakes Pilot, and Cruisers Net.

An immediate and consistent hit with home cooks as well as boaters and RVers, Sandie took her fans’ encouragement to heart and published a cookbook, “Recipes from Sandie’s Galley,” in 2007.  A second cookbook, “Gone Overboard,” came out a few years later.

Each hardcover, spiral-bound cookbook features appetizers, salads, soups, sandwiches, main and side dishes, marinades and dressings, desserts, and beverages. Most of them can easily be made within the limited confines and appliances of a boat, RV, or camper. The second book also lists 60 tips and tricks to guarantee success in any kitchen.

Sandie’s family say, however, her most remarkable accomplishment and her greatest joy was the successful blending of families — six children between her and Jim, ranging in age from eight to 23 — when they married in 1993. Together they established a loving home, forged strong bonds, and generated traditions and memories now being passed on to nine grandchildren. It was Sandie’s passion to celebrate each family member’s uniqueness and to maximize every opportunity to gather together. And it was the hospitality of her heart that kept them coming back.

“Nothing has demonstrated that more than how, the last year of her life, our family came together,” Jeff said, adding that Sandie achieved her “last big request in life” of having Christmas with her family and grandchildren. “Our family came together to manage the challenges that she faced. It hasn’t always been perfect, but, like always, we came together as a family to make what needed to happen, happen. That’s the real testament to Sandie.”